Pinktails verse Woodville West Torrens at Ottaway Oval on the 9.11.2019 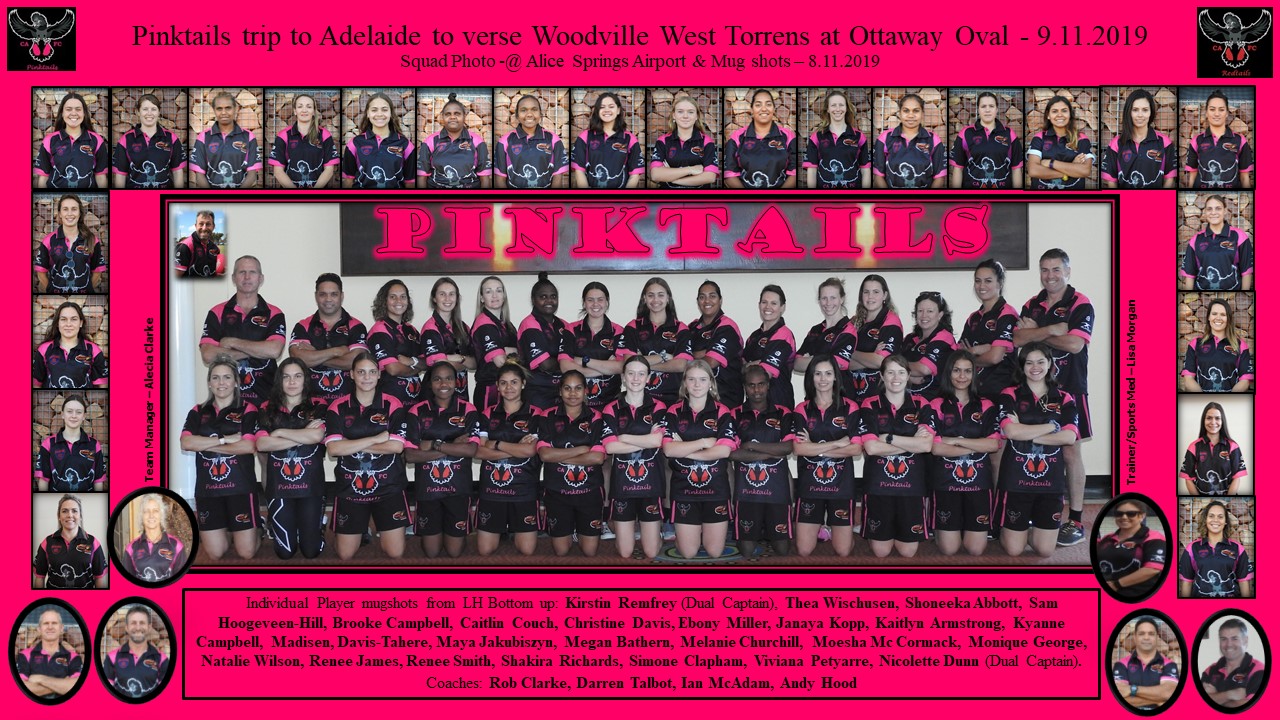 It was an overcast day of around 18 degrees Celsius with gusty winds as our Pinktails players ran out on a relatively small field to challenge the Woodville West Torrens team after 6 weeks of training back at Alice Springs with a squad of around 30 Ladies from our 5 Clubs. 10 of the 24 had played in previous Pinktails teams and the rest were new to the RPRTP, 8 of whom were U18 years of age, the youngest being our 14-year-old –Kyanne Campbell.

1st Quarter: It took the Pinktails players a bit of adjustment to get used to their positions and roles, as well as overcoming the initial nerves, of which was quite obvious with our younger players and understandably so. Woodville WT had plenty of pressure and presence from the first bounce. Our experienced seniors in Dual Captains –Dunn & Remfrey, as well Abbott, Miller, Mc Cormack, Wilson, Bathern, Couch, Hill & Petyarre steadied the ship and brought some composure to the group. Couch intercepted the ball as it was trying to make its way out of our attack and fed it back to Armstrong for the 1st goal of the game. Woodville WT answered within seconds as we failed to set up our defence quickly. We had opportunities but could only manage 3 points where as WWT kicked 2 more goals to take the lead after the 1st quarter by 9 points.
Pinktails 1-3-9 to Woodville West Torrens 3-0-18

2nd Quarter: The Pinktails continued to try and find some flow and composure as Wilson worked hard to gather the ball and kick the 1st goal. Once again, we let WWT answer with 2 quick goals. Dunn lead by example and steadied the ship with her poised defensive work and accurate delivery back to the mids and forwards. She had great support by Bathern, Davis-Tahere, Abbott, Churchill, Wischusen and Clapham in defence. Up in the forward area Hill, Wilson, Armstrong, James, K Campbell, B Campbell and Richards tried to get some space to create some goals scoring opportunities without any luck. Our smallest forward Davis chased and hunted down the ball with some amazing unrewarded tackles. Plenty of hard and effective work was done across the midfield by Smith, Miller, Remfrey, Kopp, Mc Cormack, Jakubiszyn, Couch & Petyarre to prevent WWT running away with the game and holding them to a lead of 21 points.
Pinktails 2-3-15 to Woodville West Torrens 6-0-36

3rd Quarter: Coach Clarkey instilled some positive messages in the half time break to give the Pinktails some renewed confidence. Kopp and K Campbell cut loose out wide to run the ball in and resulted in 3 scoring opportunities for Hill, K Campbell & Kopp all missing the main post to add minors before Kopp finally kicked a goal followed by another minor for K Campbell. Across the midfield, Dunn, Remfrey, Couch & Miller were lethal in cutting off any further movement from WWT keeping them scoreless for the quarter and reducing their lead to 10 points. Smith was placed in defence on one of WWT tall forwards to help impede their flow and opportunities.
Pinktails 3-8-26 to Woodville West Torrens 6-0-36

4th Quarter: The Pinktails fought out the game with true Central Australian Spirit, never shying away from the fight to try and take the lead. WWT were able to hold on and also put in a gutsy last quarter with both sides adding a goal and point each, B Campbell was our goals scorer and K Campbell added her 4th point for the game. All in all, it was a very pleasing game of some very exciting football and a valuable experience for all that ran out in the Pinktails Guernsey, especially our junior players. It was also a huge effort by our solo Runner -Andy Hood.

Well lead by Coach Clarkey and his Assistants – Ian McAdam and Darren Talbot. A massive
Thank you to Lisa Morgan as our Sports Med/Trainer and follow up care and recovery in the ocean for the girls after the game.
Thank you to Everyone involved.

-Write up by Alecia Clarke 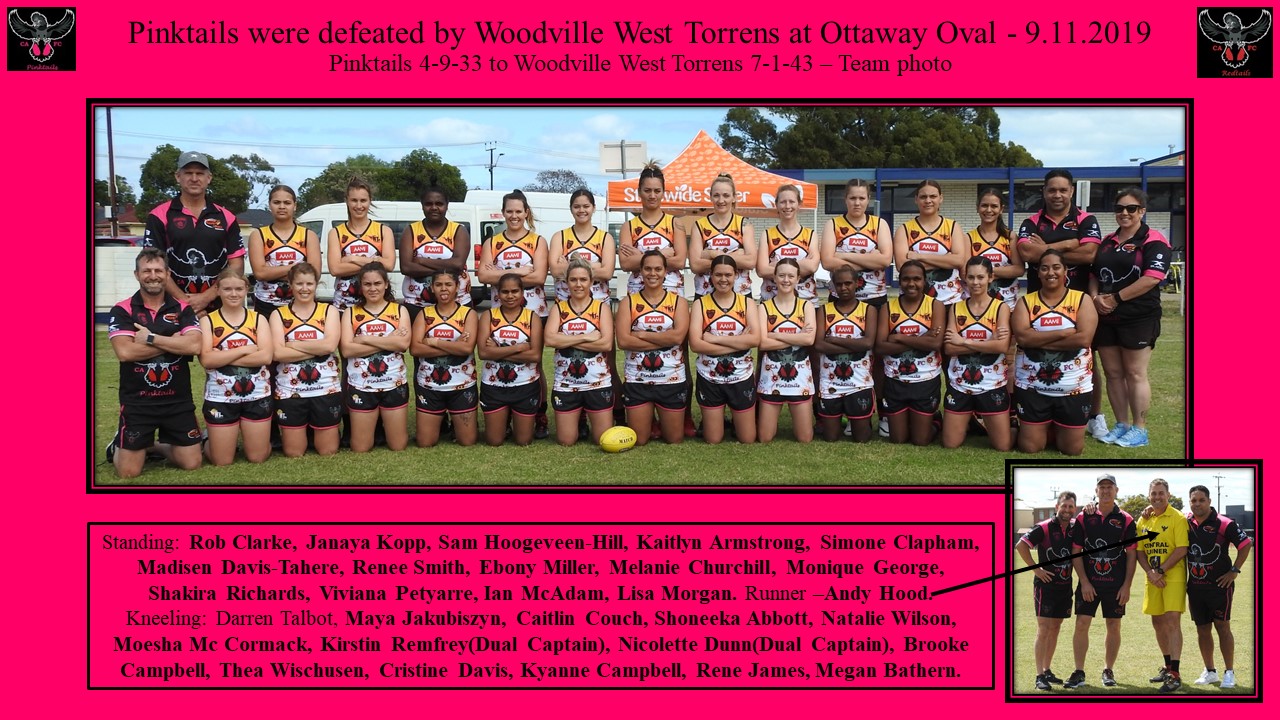