Central Australian Redtails verse The Top End Storm on the 21st July 2019 at Traeger Park - Televised by Channel 7 to The Nation. 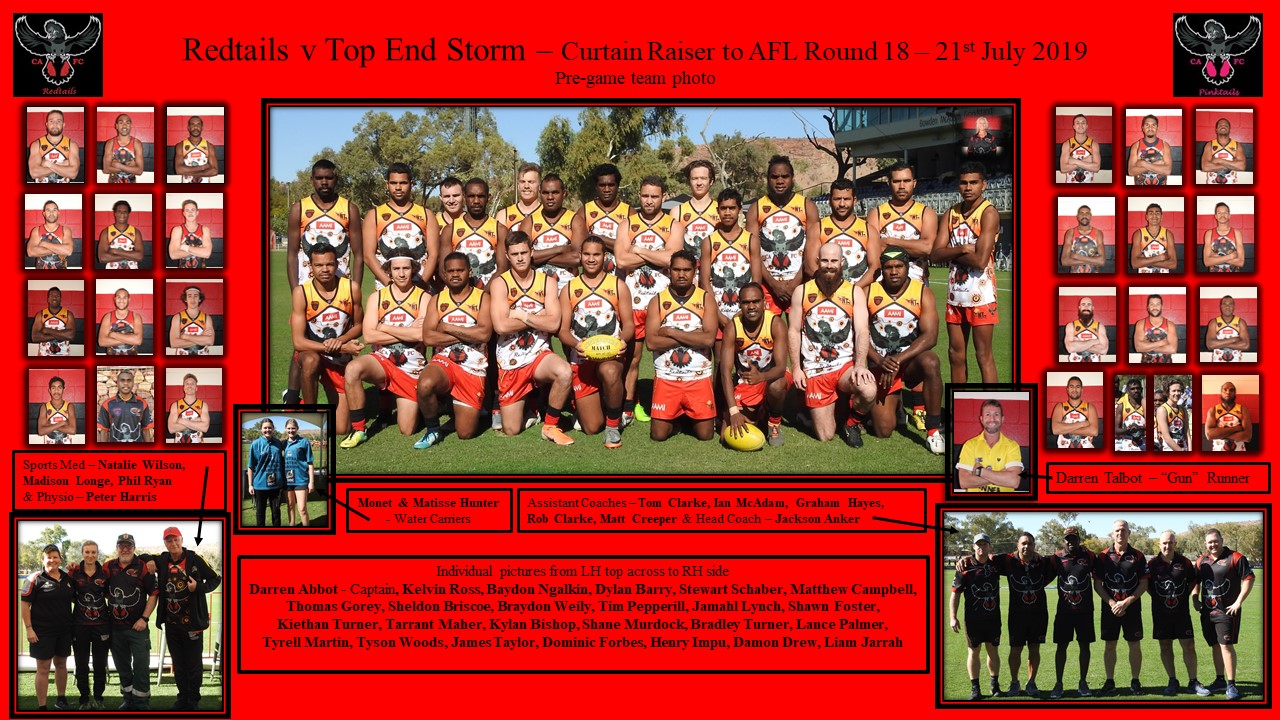 Jackson Ankers continued into the Head Coach role after being in amongst the Redtails program and trainings for nearly 2 years and coaching them in the March game earlier in the year down in Adelaide. He was met with a couple of last minute changes, but managed to rally around the players getting them ready for their next challenge against the Top End Storm, with assistance from Rob Clarke, Matt Creeper, Ian Mc Adam, Tom Clarke, Darren Talbot and Graham Hayes.

The composure in the group was commendable even with many new faces, only 4 players had played in last years game against Top End Storm. They had 4 training sessions as a group prior to the game. That’s what the Right track Program is all about, creating opportunities for our young men and women from around Central Australia.

The first quarter was a pretty even affair with both teams kicking 4 goals, Redtails just nudging ahead by 2 points. Barry and Gorey kicking a goal a piece and Woods with 2 goals. Redtails 4-3-27 to Top End Storm 4-1-25.

One of our key Backmen Forbes sustained and ankle injury forcing him to take no further part in the game, this left Ngalkin, James, Foster, Lynch, Impu, Schaber and Maher the task of containing Top End of which they executed beautifully keeping them scoreless in the 2nd Quarter. Meanwhile our Midfielders Liddle, Murdock, K Turner, Palmer and Weily lead by Captain Darren Abbott where able to gather the ball effectively and efficiently from the Ruckmen Briscoe and Pepperill utilising the wingmen B Turner, Drew and Bishop to hit up the forward contingent Ross, Barry, Woods, Campbell, Martin, Gorey and Jarrah. Our Small forwards Ross and Woods finishing off with 2 goals apiece and Jarrah being a bigger target also added 2 goals to increase our lead to 48 points. Redtails 10-13-73 to Top End 4-1-25.

Our intensity backed off in the 3rd quarter and Top End found some momentum to add 3goals 2 to our 1 goal by Martin and a minor by Ngalkin. There was plenty of hard work done by our defenders to keep us in the lead by 35 points. Redtails 11-14-80 to Top End 7-3-45.

Redtails rallied together with some pretty gutsy footy from their leader Abbott to gain more possessions with plenty of good midfield and defensive work that had the ball being fed into the forwards for an opportunity at 8 scoring shots, with only 2 being majors by Gorey and Jarrah, the rest minors. Top End had the same scoring shots proving to be more accurate with 4goals 4 which ended up reducing our lead and win to 15 points. Redtails 13-20-98 to Top End 11-7-73.

It was an exciting fast moving game with plenty of entertaining footy highlights and action. Another successful event for our area and a great way to showcase our Central Australian football talent to the AFL Nation.